This podcast follows American Marlee Raible as she journeys to Australia and Argentina in order to explore their carceral systems. Meeting with activists, justice workers, professors, artists, ex-inmates, and others, Raible facilitates conversations highlighting the experiences and endeavors of those within and around the justice arena. In her conversations, she and her interlocutors unveil and analyze the complexity and intersectionality of the carceral dilemma.
​
Please visit the Facebook page to Like and Follow Carceral Complex to receive updates. There is also a separate website dedicated to the Carceral Complex Podcast where you can find current and former episodes as well as subscribe to receive episodes as they come out each week!
CARCERAL COMPLEX WEBSITE
FOLLOW C.C. ON FACEBOOK

There is significant over-representation of aboriginal people in the Australian penal system, much as in the case of racial minorities in the U.S. Raible was first inspired to explore the justice system in Australia due to this similarity, and many conversations either directly or tangentially address the way racism manifests in the penal system. Discussions also hit upon the topics of laws, policing, poverty, re-entry, capitalism, juvenile justice, gender, and more as she attempts unravel the densely interwoven topics within the carceral complex in Australia.

Condemned to the Labyrinth:
​The ever shifting maze of policy, bureaucracy, and exclusion of people seeking asylum in so-called Australia 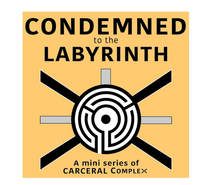 A mini series of conversations exploring the frustratingly complex nature of the detention industry in so called Australia. We discuss how immigration policies are designed to exhaust and confuse people seeking asylum. Connecting these issues to the ongoing discrimination of People of Colour and the hypocritical position of a colonial government attempting to control access to land they have stolen.

​We enter into dialogue with people who have critically thought, written and spoken about the immigration apparatus and together we attempt to uncover what makes this system so effectively oppressive and incapacitating.